I should've been in bed a half hour ago, but I stayed up a bit longer to get this feature functional.

This evening, I've been working on the breaching charge. In a nutshell, it's a special item that will blast through thin walls and doors, creating a unique entry point whilst killing and stunning enemies in certain ranges.

It's been a bit of a complicated one, since there were a lot of direction and angle calculations to consider. Firstly, the charge had to sit in the middle of the surface it was placed on, so it cleanly blew up the portion of wall it was aligned with. This was tricky for me, as there was no short way of determining which face of the wall was closest to the player. It's still a bit buggy, if you're half way between wall segments it'll choose either the above or below segment, it doesn't look natural. That's something I'm going to smooth out tomorrow hopefully.

An important note. Everything, everything is place-holder. The art most of all. I'm working entirely on the code right now, so no art will be remotely close to the final art until the code is solid. Expect coloured blocks, weird 1 pixel wide lines and debug text abound.

Black squares indicate an area that can't be breached. These will be used for door frames, wall corners and windows. Blowing up everything would be fun, but this isn't Red Faction sadly.

Blue walls indicate flimsy/weak walls, the kind that don't react too kindly to controlled explosions. The guy in black is the place-holder player agent, and the red guys are place-holder enemies. 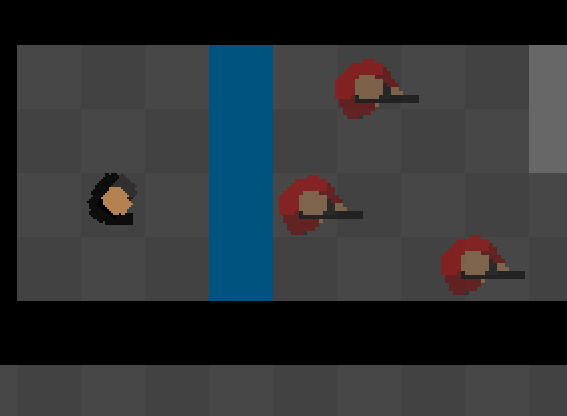 Placing a charge on a blue wall. The white line is a debug aid I was using to help me monitor which surface the charge was stuck to, and in which direction the charge will detonate. 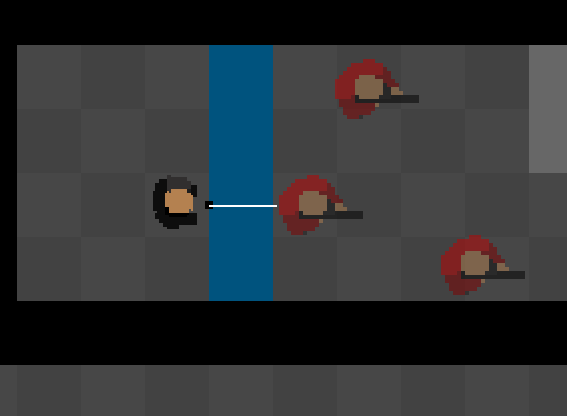 Pressing the key again, after a short delay, detonates the charge, destroying the wall it was placed on and creating a lethal, directional blast. Anything close to the wall will be.. well, dead. Anything further than that will be stunned by the shock. 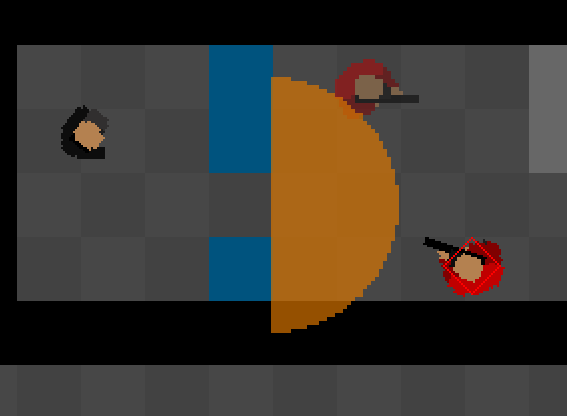 The guy closest to the wall is no more. His allies are stunned, deafened by the blast for a few seconds. This gives the player the opportunity to dive in and get in a few bonus shots.

I'm quite happy to have gotten this feature up and running in an evening, it needs some fixing but it's functional. Tomorrow, I intent to fix up this feature and work on the magnetic field.