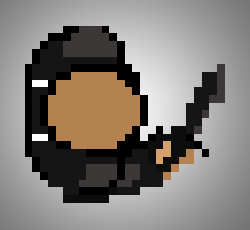 After finishing the smoke grenade, I decided to focus squarely on the last big feature missing from the basic gameplay blueprint -- melee combat. Currently I'm only working on the combat knife, as it's the weapon I'd encourage melee focused players to equip. At the moment, there's a sprite for holding it when equipped, and a basic two-slash that will deal damage to an enemy within melee range. And as I mentioned in the last post, it can be thrown at an enemy for an instant kill, and retrieved afterwards.

You will also be able to melee with ranged weapons, however, this will be much slower and deal less damage than the knife.

I decided to make the knife its own weapon, as I wanted to empathise melee combat as a separate discipline for your agent. I want the player to choose to be a melee fighter, rather than it being a last resort when they're out of ammo. This stems back to Downfall, Inc's roots, as originally there were classes to choose from. While I decided to let the player define their own class, I still wanted to keep those disciplines distinctive.

I think I'm gonna call it a night, anyway. Time to relax!