Showing posts from July, 2017
Show All

Basic foundation for mission objectives in place; in this instance, Assassination. Kill the target, then the exit becomes available -- but if you were spotted or heard reinforcements are called and search the map for you. Currently, reinforcements are endless. The idea behind this is you're not supposed to stand and fight, you're supposed to run. Assassination missions are heavily stacked against you by thematic design, so letting you blast the reinforcements and then be left with an queit map seems like the opposite of what is intended. If you stick around after murdering an important person, you're going to be overwhelmed by armed & armoured guads. These reinforcements also have body armour, making them tougher to fight if you're not packing an armour-piercing weapon. So, if you're packing stealth weapons, you really CAN'T slug it out. I'm hoping the contrast will be balanced, so being more covert lets you get further before an alarm but unabl
Post a Comment
Read more

Free Zoom: Previously, zooming in and out would expose seams in the tileset, now that I've added a bleed to the tileset there isn't that problem anymore so hey you can zoom in and out now at will! Useful for adjusting zoom to ensure off-screen enemies aren't in range during gameplay. Suppressing Fire: This particular enemy type will continue advancing after losing sight of the player, shooting at where he thinks the player is. He will break off and come to investigate if he doesn't see the player for a few seconds. Magazines as Projectiles: When you reload, you throw your magazine forward, which can stun an enemy if it bonks them on the head. You have just enough time to reload and double-tap them before they're unstunned, so react quick! Enemies Using Grenades: Unlike the previous enemy type, enemies that use cover are more cautious and will sometimes throw a grenade near where the player last was in an attempt to "flush"
Post a Comment
Read more 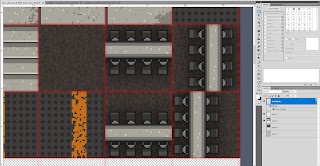 I wanted to be able to zoom in and out during gameplay, so the player could adjust their view depending on the size of the level they're in. In close quarters, you want it up close so you have good situational awareness. In open areas, you want a good view so you don't get out ranged. A serious technical problem with this was that tiles would have a seam. I read into the technical reasons for this, but the easiest way for me to explain this is like mip-mapping in 3D. You need a decent bleed so if the hardware over-samples it doesn't pull empty space or adjacent pixels. So, I had to spend a little while tonight putting a 2 pixel bleed around EVERY tile. Urgh. Tedium. But ultimately, you do what's necessary don't you. I've also been looking at top down shooters with various art styles, trying to figure out which one reaches out and grabs me, and which one will best suit AGGRESSOR. I'm not happy with the half-way pixel look, the sort of Hotline Mia
Post a Comment
Read more
More posts