Showing posts from March, 2017
Show All

March 31, 2017
Locked doors will block off quieter or more straight forward routes, and there are multiple ways to get around/through them. 1) Shotgun; currently hit detection is a bit funky, and there's no visual effect yet for a shattering door. 2) Brute Force; a few strong kicks will eventually break the lock (and the door) free. 3) Lockpick tool; silent, reusable, non-destructive. Needs sound effect currently. Civilians are in, with art, they wander around and flee at the first sign of danger. Enemies surrender properly with art and fleeing. Need to do "undercover" enemy art for those that blend in with civilians, atm that segment of code is unused. Wrapping up remaining extra gameplay elements now, should be on to missions soon but other projects are priority ATM. - Rob
Post a Comment
Read more 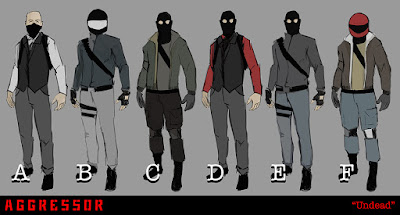 Working on art for the enemies currently, extra animations as they know surrender if they've seen too many allies killed and other such scenarios. Here are some of my sketches, from before I went into doing the actual in-game art. First one is some exploration; keeping them looking civilian. Didn't want to do a "paramilitary" or "tacticool" look for them, or go down stereotypical "terrorist" designs. Decided on the red shirt, "bodyguard" look, as these guys would be around and looking after a high value target. Also decided to keep two of the other designs, for regional variations. One is a bike messenger type look, for more urban/public areas. The other is a more rough'n'ready military look, for safehouses and underground headquarters. Where they don't have to blend in so much. Anyway, talk more about the character art soon. - Rob
Post a Comment
Read more
March 19, 2017
Working on bringing in the handful of tweaked/new features and getting the core gameplay finished before moving on to the missions. Civilians are in, so is the surrender state for enemies. Both function in a similar way, they hold their hands up when faced with the player, and run away when the player is gone for a while. Civilians will run as soon as possible but I intend to keep enemies in one place for a good 30 seconds, purely so the player can deal with all hostile enemies and secure the area before having to focus on surrendered enemies. Locked doors are also sort-of in place, you can kick down a locked door and blow it off the hinges with a shotgun blast, but there's an item I'm working on which lets you get through a locked door silently and quickly. Locked doors will basically block "quiet" routes, alternate routes that bypass groups of enemies but for obvious reasons are a tactical choice. Lockpick needs work and there's come civilian stuff to fix,
Post a Comment
Read more

March 16, 2017
First thing; the name, AGGRESSOR, it's locked in now. I'm sure I talked about this before, but just to repeat myself; "Downfall, Inc" was a working title that just stuck around. As the theme and tone of the game changed, it became less relevant. You were no longer a shady agent, working to bring about the "downfall" of a rival company. It was no longer Syndicate. I haven't touched the URL as a few people have previously asked for a link, and I don't want to ruin any bookmarks. Second thing; as of yesterday, I've started working on the game again. At the moment, it's only an hour or two in the evening, with weekends. Other work is currently my priority, still. Most of the changes I have in mind involve the missions and the mission structure, which isn't a problem as I hadn't really locked in a mission structure and only had temporary missions. I've been implementing the few new gameplay features planned these past nights, a
Post a Comment
Read more

March 06, 2017
Has it really been nearly seven months since I posted? Damn. Game currently isn't a priority, real life has taken the centre stage at the moment. However, I'm still ticking away, getting everything ready to start back up again. Bear with me. - Rob
Post a Comment
Read more
More posts