Showing posts from September, 2014
Show All

September 28, 2014
It's been a while since I last updated, I'm just seriously preoccupied right now. I am working, albeit slowly, still. I'm a little burnt out from A.I, so I've been working on the menu system. It's all functional at the moment, including a very basic loadout screen and map selection. My next task is to turn this text-based interface into a GUI, which is actually the fun part as I enjoy designing a fair bit. Hopefully, GUI update to come next. Downfall, Inc is still going strong, just unfortunately adult life gets in the way a lot. Still alive! - Rob
Post a Comment
Read more

September 16, 2014
I don't have much to report for today, I'll be honest I've been in a bit of a bad mood since I got back from work so I haven't felt like doing much code. I managed to get the enemies to search for the player once alerted, so there's one thing. I've also being planning out the menu screens, I felt the need to do something a little different for a bit. Anyway, I'm going to do some drawing, I need to cheer myself up. More stuff tomorrow! - Rob
Post a Comment
Read more 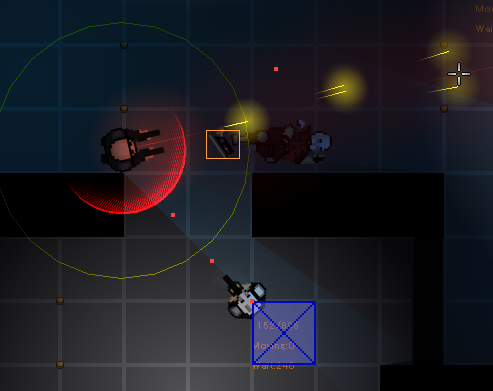 New tracer round effect, and the damage indicator ring. The player here was hit by two rounds, so it formed a semicircle as both indicators overlapped. The red dots are usually hidden, they're just a debug thing for me. Same for the blue square, ignore all that. Tonight I created a damage indicator ring, which visually indicates which direction the player has taken damage from. While the screen shake lets you know you've taken damage, the damage ring lets you know which direction the damage came from. Additionally, I created a new tracer round effect, which is just a nice visual touch to the existing bullet art. Now, usually, bullets don't glow. In fact, they're not visible at the speed they travel at. As you may have figured from this blog, realism isn't my main aim. I like the tracer effect, it helps really empathise how lethal skirmishes are with all these tracers tearing through the air. I've started working on the special 'Search' behaviour
Post a Comment
Read more

September 11, 2014
When the alarm has been raised, enemy reinforcements will start to arrive. They'll arrive in waves, via the nearest spawn point to the player. At the moment, they simply spawn and move either to idle or to roam. However, my next step is to flesh out this feature, so the enemy first moves to the alarm location before switching to default mode. Also, enemies will spawn in groups depending on the threat level, with appropriate equipment. Enemies will now roam, if told to. This functions almost identically to civilian movement right now, but it will we slightly different. Hostiles will have their own "roam" nodes, which cover important areas to search. When an alarm is raised, all enemies that are aware will switch to this search/roam mode, to try and find the threat. This is after reacting to any sound/sight that they noticed. So, productive evening overall. The basics of two tasks are done, they just need to be expanded upon. All that remains for the enemies is some t
Post a Comment
Read more

September 09, 2014
I'm back! If I'm honest I got back a week ago, but Wasteland 2 came out, and between that and work I've been pooped. Time to get back on the horse! Starting tonight onwards, I'm back on Downfall, Inc . I shook up the game feel a little tonight with an experiment. Holding the right mouse button draws the current weapon, slowing the character to a walk as he aims, but allowing you to shoot. Letting go lowers the weapon, which increases your move speed but stops you from firing. It actually has a pretty decent effect on the game, forcing you to decide between fight or flight more seriously. While aiming you're easier to hit, as you can imagine. You may be wondering why I tried this. Well, at the moment, pistols have little strategic value. Automatics and shotguns deal more damage, faster. Now, pistols have on major advantage -- mobility. A pistol barely slows you down whilst aiming, whereas an assault rifle slows you to a walk. The heavier the gun, the less mobile
Post a Comment
Read more
More posts