February 07, 2016
I haven't done an update in a while, so here's some of the stuff that's been done recently; 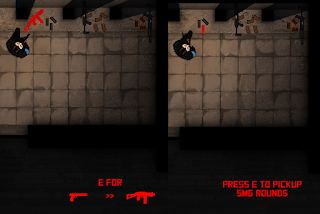 Previously, to pick up a new weapon or ammo, you'd get near it and press "E" when the prompt comes up and you'd grab the nearest item. Now, the placement of your cursor determines what pickup you're interacting with and the E key confirms picking up. 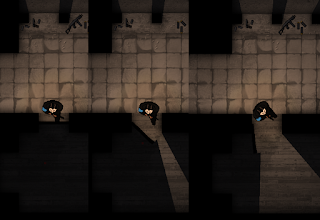 I've installed a new lighting script/system in place of the older one. The previous system only handled perfectly square objects, which obviously wasn't useful for rotating objects like doors. This new one handles shadows perfectly. 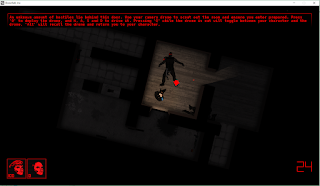 And finally, I've written a fake 3D script for the walls that border each level, enabling them to show a bit of fake depth and give the level a bit of life. It's an orthographic projection so it doesn't look as good as a true perspective projection. It's been a rocky road, and I'll look into polishing and upgrading it later, but it's a start. Why haven't I used the actual 3D part of Game Maker? Numerous reasons, mostly because it breaks mouse and lighting.

Also, I've added a subtle rotation to the camera as you move to help make it feel a bit more dynamic and less static as you move around the level.