A whole heap of things and fixes

May 23, 2015
It's quite late and I'm really tired, so instead of writing a big long post I'm just going to list the things I've done since the last update (well, the ones I can remember);

- Melee enemy fixed and smoothed out (still occasionally acts weird, on my to-do list of things to investigate)

- Enemy types, with three idle states: Idle (look around), Patrol (circle the room) and Wander (roam about the map)

- Game Speed modifier, which allows for slowing time and pausing

- Holding space to issue a command for the AI Companion slows time to a crawl, allowing you to precisely decide and place your move marker without the pressure of expecting an enemy to ambush you as you try to locate a good spot

- Various particles to do with gunshots and impacts

- Fixed the doors and AI interaction with them

- Vector-based lighting and a line-of-sight "light" layer to blacken areas outside of the characters view (adapted from a third-party script, credit will be given)

- Fixed a memory leak to do with use of surfaces

Here's a screenshot of the lighting (orange lights) and line of sight (black), with the camera drone being used to spot an enemy around a corner (thus expanding line of sight) 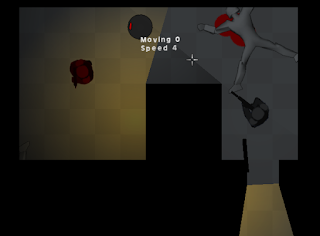