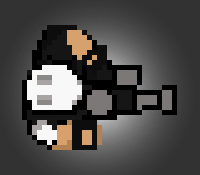 Melee attacks knock the enemy back, and stun them briefly. Enemies no longer attempt to find cover if you're right near them, as this led to an annoying cat-and-mouse chase that really didn't feel groovy. In a nutshell, enemies have more courage, and will stand and fight if you charge them. Yeah, it's not realistic, but it's also not fun the other way. Trust me, I've been testing it all day.

You can kick enemies now, an alternate melee attack that causes less damage but provides more force. Force determines how far an enemy flies, so a kick will send them flying while a melee attack will do more damage.

If an enemy hits the wall at a certain speed, they will be killed (I like to think they're knocked out cold, personally). They have a different "death" sprite too, so they're not bleeding and are slumped against the surface.

I really enjoy running the test level, so I took a screenshot of my latest encounter. All of these were melee kills, either using a melee slash, a kick or a thrown knife.

It's coming along nicely, I think! :)